Here is the third installment in the crazy history of Villa Santa Cruz.  If you have not read the first two entries, make sure to check them out first – History Post #1:  The Journey Begins! Buying the Property (2001 – 2002) and History Post #2:  The Lettuce Debacle and Breaking Ground on the Villa (2002 – 2003).  Enjoy!

As the summer of 2003 approached, Matt and John’s only choice was to lay low and recover from the frustration and disappointment of the failed farm and stalled construction project. Again out of money, they resumed a simpler life – games of coconut bowling on the beach, sunsets with cold drinks in hand, and quick trips up to San Diego to continue their remodels. The weather in these late spring/early summer months was warm and breezy – exactly what one dreams of when they think of Mexico.

As the calendar turned from late July into August, the balmy weather gave way to a humid stillness and rumors of the upcoming hurricane season filtered throughout the town. Whenever Matt and John needed advice or wanted to hear the latest news in town, they would often stop in to visit with Barbara Perkins at La Canada del Diablo, their favorite watering hole. To them, Barbara, an American living in Todos for over 20 years, was the “town mayor” because she was always up for a chat, well plugged in to the town’s happenings and was a great source for help, recommendations, etc. While chatting with Barbara in mid-August, she cautioned them about the upcoming hurricane season which was predicted to be busy with several major storms. Like a mother hen trying to protect her chicks, she wanted Matt and John to be as prepared as possible. Barbara reminded Matt and John just how powerful and destructive hurricanes can be and urged them to stock up on extra water, food and supplies so they would be ready for the storm. Yet, for as much as they valued her opinions on most matters, Matt and John were relatively unfazed by Barbara’s warnings. They had heard many tales of Hurricane Juliette, a Category 4 storm that spun around Todos Santos for days on end in September 2001, leaving people without power and water for days. The townspeople mainly remembered the rains and flooding, there was little mention of strong winds. Matt and John shrugged their shoulders at the Juliette talk – they knew they could handle a little extra water.
Even though they had no prior experience with hurricanes and had never gone through any type of severe storm, they just did not believe anything could live up to the “hype.” Within the next few days, they spotted a storm approaching Baja on the weather tracking websites, Hurricane Ignacio. As a boy from landlocked Winnemucca, Nevada, Matt was comforted that the weather service predicted that Ignacio would reach only a Category Two level – he figured that if the measuring scale went up to a Category Five, how bad could a Two actually be?
Within the next day or so, John headed up to the US on a long scheduled trip to visit his family and Matt stayed behind at Rancho Santa Cruz to hold down the fort. Matt was looking forward to some down time in the trailer on the dune with their dog, Molly, and her new litter of puppies. A few months earlier, when Tucker was still alive, Matt and John adopted Molly when they were driving down the Baja Peninsula. They had stopped in Mulege (pronounced Moo-leh-hay) for the night and were having dinner and beers at a local bar, when a man came in with a ball of fluff in a cardboard box. He said that someone in the bar had to take the dog, otherwise he would put it on the “Tecate truck” – a euphemism for driving the dog to the desert and leaving it to die. This was too much for Matt and John’s bleeding hearts and, after one too many drinks, decided to adopt the dog. Since they were giving this dog a second chance at life (like a Mulligan in golf), they named her Mulli, which quickly morphed into Molly. It turned out that Molly was pregnant and gave birth to a litter of nine puppies just before John left for the US in mid-August 2003.
So, Matt would spend the next week in the company of Molly, her nine tiny puppies and their “Siamex” cat, Danny (named after Danny Noonan from Caddyshack). Matt occasionally checked the storm tracker websites on the internet and saw that Hurricane Ignacio was approaching the Pacific coast of Baja, yet he still didn’t take any precautions – he did not buy extra food or water, he did not close up the trailer windows or tidy up their campsite. He figured he would just hunker down inside the trailer, catch up on DVDs of The Sopranos and watch the storm go by.
The next afternoon, Matt noticed the winds picking up and sent a joking email to John letting him know that the storm was almost there. He wrote, “Nice knowing you, man….if I don’t make it out, it’s been a good ride…” As the sun went down and the skyline turned from a bluish dusk to pitch black, the storm hit and Matt started to feel panicked – had he prophesied his fate in that email? The rain was torrential and incessant, angrily falling from the sky in heavy sheets and flooding the property. The winds were overwhelmingly powerful and ferociously loud, shaking the trailer with immense force, frightening Matt to his core. All the windows in the trailer had rusted open after a year in the salt air, and the wind and rain barreled inside, creating a swirling chaos in the trailer. Matt raced around trying to shut the windows, but his efforts were futile. Hurricane Ignacio was inside the trailer – breaking glasses, whirling beach sand, and frightening the whining new puppies. His internet service was soon cut off and his solar system ran out of battery power, leaving him disconnected and in total darkness. He tried in vain to light candles, but it was impossible to keep a match lit – the wind and rain were omnipresent. 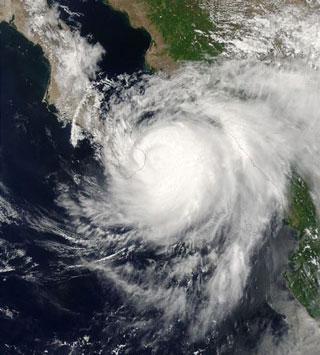 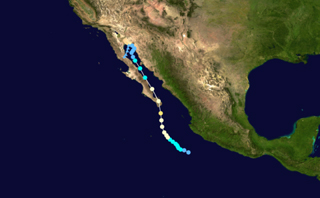 Check the Blog again soon to learn how Matt & John resumed construction at the Villa, created all the amazing design elements, and furnished it to boot!