When giving tours of the Villa to guests, the pièce de résistance, without doubt, is the spectacular view from the Roof Terrace. With sweeping vistas of the Pacific Ocean, our guests glimpse pinpoints of surfers in the waves and then turn to us and ask, “Do you surf?” We sheepishly look at the floor, avoid eye contact, shuffle our feet, and barely whisper, “No, not really.” We then ramble off a litany of excuses like “We’re so busy” or “I once had a bad experience in the ocean” or, my personal favorite, “La Pastora is not a beginners’ break, etc.” just to salvage our reputations. Matt and John even claim that they discovered our property in 2001 while on a “surf trip.” They did look the part – they had surfboards strapped to their old VW van and camped at the major surf spots – but they managed not to actually surf, choosing instead to relax with some cervezas on the beach. While Matt has had some friends take him in the water to learn to surf, the lessons usually consisted of one phrase – “Charge it, bro!” – leaving novice Mateo to figure it out for himself . . . not an easy task for a boy from landlocked Winnemucca, Nevada. Poseidon seemed to get the best of him every time.
With all these excuses and cover stories, it was time to grab the bull by the horns and learn to surf. We called up Mario Surf School Owner, Mario Becerril, and arranged to have a lesson with two of his instructors, Chuy and Luis, at Cerritos Beach. (www.mariosurfschool.com) Located just 25 minutes south of Villa Santa Cruz, Cerritos is a good learners’ break due to its sandy floors and smaller rolling waves. Matt and I met Chuy and Luis on the beach, put on our wetsuits, and learned the basics while still on the sand. They demonstrated how/what position to lay on the board, how to push up to a kneeling position, to balance your weight, and finally to stand up on the board and ride the wave. We gave it a try on the sand a few times and then we were ready for the waves.
The waves were a bit big that day, so we stayed “on the inside” and focused on riding the white water. Our instructors were with us the whole time, making for a great beginners’ experience – they helped us over waves on our way out, decided which wave we would ride, and released us into the wave. With the major decisions made for us by the instructors, we could focus on converting the motions we had gone through on the sand into actual surfing. And, the result was amazing – we both stood up on the first wave! We were really doing it! 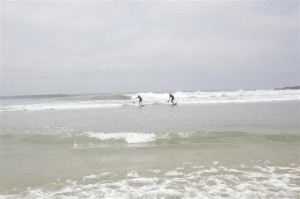