Raúl Ramírez is an explorer of the night and the earth, of texture and color. A native of the state of Oaxaca and a resident of Chiapas for many years, Raúl Ramírez has lived in a world of inevitable art. In his adolescence, plastic art was in all the museums and a few years would be enough to realize that there was no other possible way than the commitment to art.

Between these two moments in his life, he would associate with figures such as Francisco Toledo that had little of artistic and a lot of business. On some lost night seven years ago, Ramírez would say it out loud: “I don’t want to play at being an artist. I want to be an artist”. The coin was in the air.

The years passed and with them a disciplined training and talent based on a critical eye. In the work of Raúl Ramírez there is a dialogue between two consistent traditions: Mexican modernism and a certain aesthetic of the European avant-gardes of the 20th century, specifically the expressionist and the fauvist. Between the inheritances that Ramírez collects are the spontaneity of the CoBrA group and Matisse’s empire of tonalities, the colors of Tamayo and the textures of Toledo. In Ramírez’s color abstraction, we find constant themes: the bull, the night, the earth, the fish, the mourners. 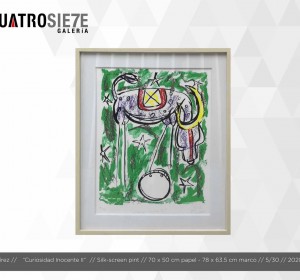