Conrado Horacio Alvarez Carrasco «Chac» this plastic artist was born in Santiago de la Villa de Etla, municipality belonging to the Central Valleys of Oaxaca. He began his academic training at the School of Fine Arts of the UABJO. Later he started out different certifications, courses and workshops in the area of ​​plastic arts and pedagogy; this last in order to focus on teaching and accompanying children in their approach to culture.

In 2016 and 2017 he was awarded the prize be “Ray Tico Internacional” for excellence in their work and to the Oaxacan contribution in the plastic arts; which is granted by the Costarican community in Mexico to the highlights in plastic arts, cinema, radio, altruistic associations, among other.

In 2018 he received the title of Doctor Honoris Causa, investiture granted by the Doctrine Cloister Honoris Causa at the Jose Luis Cuevas Museum of Mexico City, in recognition of his professional excellence, social, educational and cultural. 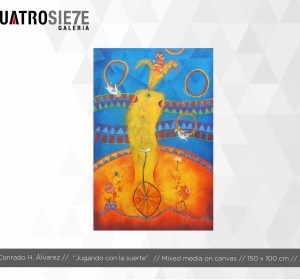